Our story begins at the end of 2013 with one man at the helm, Harry Sauter, trying to bring his love of pickleball to the town of Celebration.

Fast forward to early 2016, gaining some more pickleball fans to help with his quest, approval was given to make one of the tennis courts a dual usage court. Finally a step in the right direction! Unfortunately it didn't last as the courts were resurfaced and tennis players wanted their court time so management decided not to allow any chalking / taping.

Now on to the North Village Pavilion with a concrete floor, tape for the lines and our first net donated by Bryan and Laurie Campbell. We had to deal with pillars to the sides of the court and a roof, making lobbing difficult, it was a challenge to play in this location. However, we were just happy to be playing pickleball and knew that if we could play well here it would just make us better players on a normal pickleball court!

With a mix of ages and abilities, the experienced pickleball players taught the newbies and a pickleball passion in Celebration started to grow. Knowing the pavilion wasn't going to be a permanent solution to our pickleball addiction we started looking for a different place to play...

In January 2017 our next attempt was to try inside at the Celebration Town Hall Activities room.

This might be a perfect spot for the Florida summers!

The floor provided the perfect bounce for the ball. Unfortunately a lack of space around the court lines and still no ability to lob the ball, the group quickly decided this was not the place for us.

Unbeaten, we continued on our quest to find a new home!

Thankfully our new home wasn't too far away...

Thanks to David's persistence he was able to secure us a place to play at the Georgetown Tennis Court.

Here we are able to have 2 pickleball courts with portable nets, we finally have a great place to play pickleball with no limitations.

We started with chalking the lines which became tedious as new chalk was required after every rain.

We were then approved to tape the courts. How many pickleball players does it take to tape one pickleball court, at least 5 we found! ;-)

The tape doesn't last forever but the tape residue left behind seems to last a while so sometimes we have a bit of both.

In April 2017 we started some advertising so the whole of Celebration will learn how fun the sport of pickleball is. We built a website and Facebook page, thanks to Lucy Clark. We held our first Beginner's Pickleball Clinic.

In January 2018 we added a lockable storage bench to the court to hold our pickleball nets and balls so our club members have access to them anytime.

6 of our players played in a tournament in Winter Garden in March 2018.

Congrats to Jeremy and Scott for winning GOLD in the Mens Doubles 3.5! They won all of their 8 games!

Also congrats to Dave and Lucy for winning the SILVER in the 19+ Mixed Doubles 3.5!

In March 2018 we designed a club logo and ordered club t-shirts, thanks to Lucy Clark and The Dink Shop. Please use the Contact Page to email us if you would like information on how to order a shirt.

In April 2018 we decided we were ready for 3 courts and were approved to paint. Here came the blue paint and we now have 2 courts on 1 side of the tennis court. :-)

Continuing with our advertising efforts in Celebration, we had our first ever article published in the Celebrations News in May 2018 about the Winter Garden tournament.

Following on from advertising we reached a major milestone in growing our pickleball club with 21 players attending our Saturday May 26th 2018 meeting! :-)

In August 2018 our group had expanded so much that we were ready to use all our space on the tennis court and make 4 courts! Out came the blue paint again and 2 courts created on the other side!

The beginning of 2019 brought us another boom in numbers. We had multiple meetings of 30 players in January and in February one meeting saw a record number of 37 players!

We're really showing Celebration that there is a need for permanent courts! With the update of the Celebration Master Plan starting this year we hope to become a top priority.

Also in early 2019, 14 of our club members participated in the Central Florida Pickleball Winter League. We competed against 5 other teams from the Greater Orlando area, 1 home and 1 away game against each team, playing 2 mixed, 1 men's and 1 women's doubles match at each meet. Our team enjoyed the experience travelling to other places and playing with other players. We ended up taking a respectable 4th place in the league based on games won (with a 3 way tie for 2nd in individual match wins).

Thanks to Ron Rondon, he organized our first social round robin!

He arrange mixed doubles for advanced and recreational players, followed by women's and men's doubles. Partner's randomly put together by blind pick.

Such a great event!

2019 was a big tournament year with 15 GOLD, 13 SILVER and 3 BRONZE medals, our club members really brought home the hardware!

We also had 3 members of our club play singles in tournaments for the first time this year, David Eastman, Scott Kirschner and Jami Viscomi, great job guys!

Here's a gallery celebrating our winners. 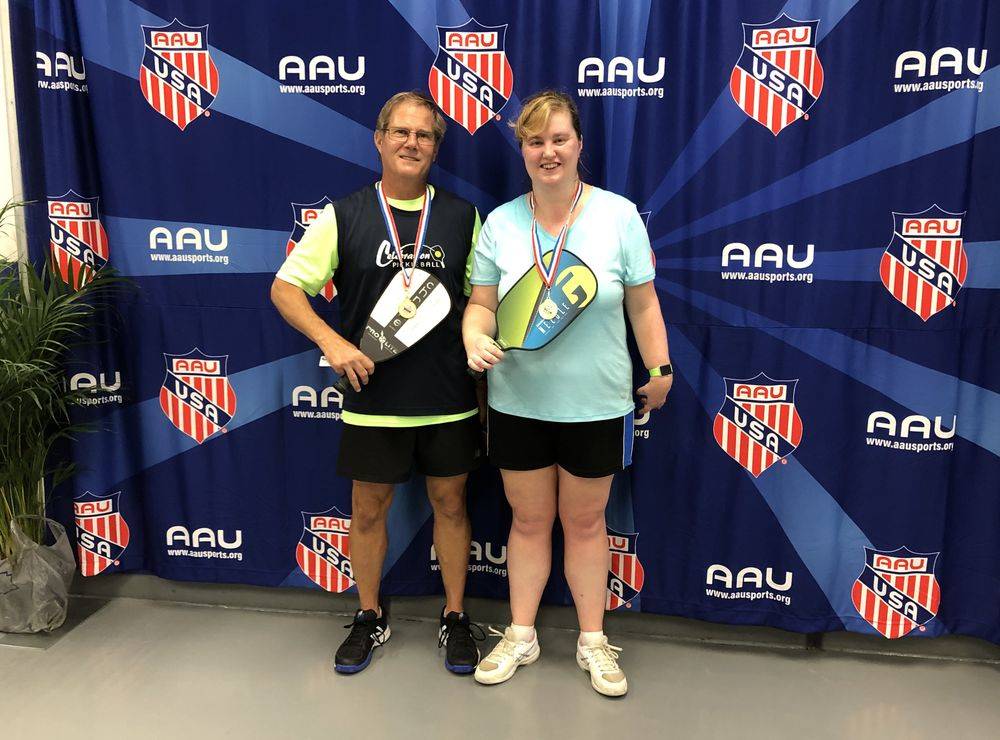 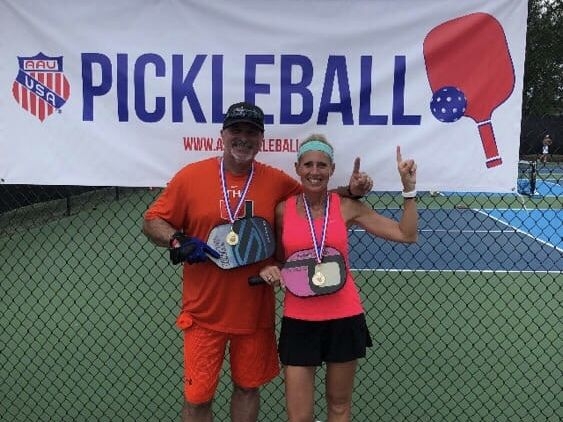 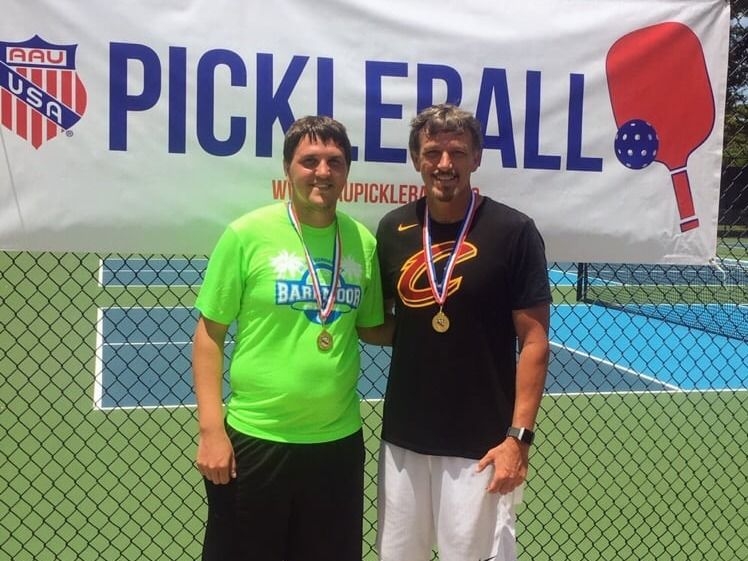 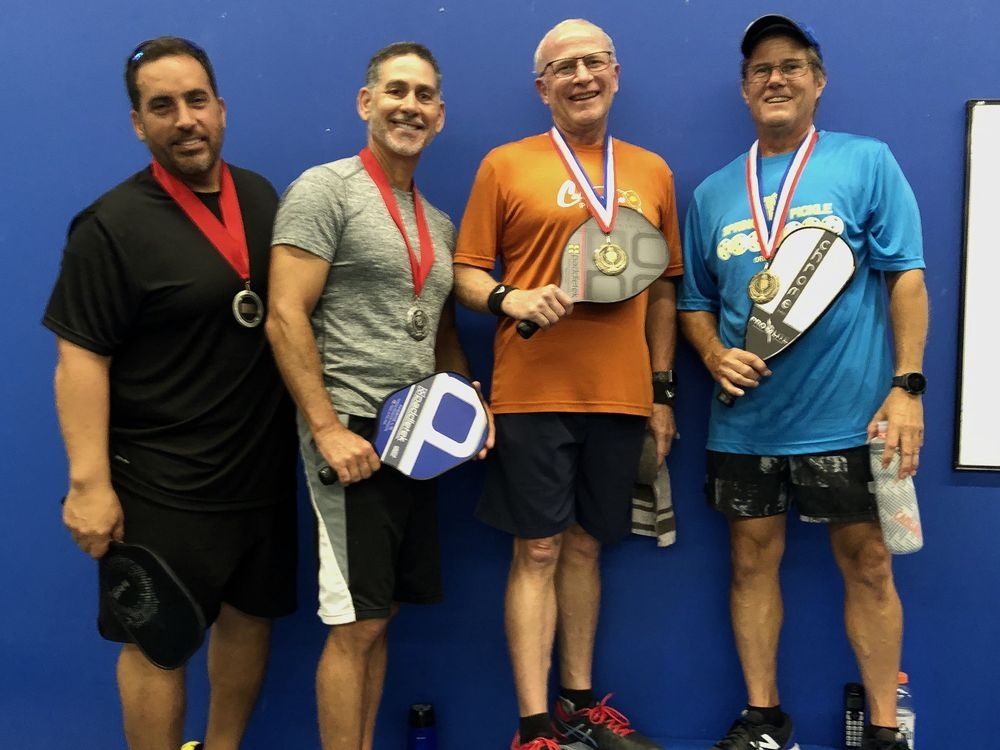 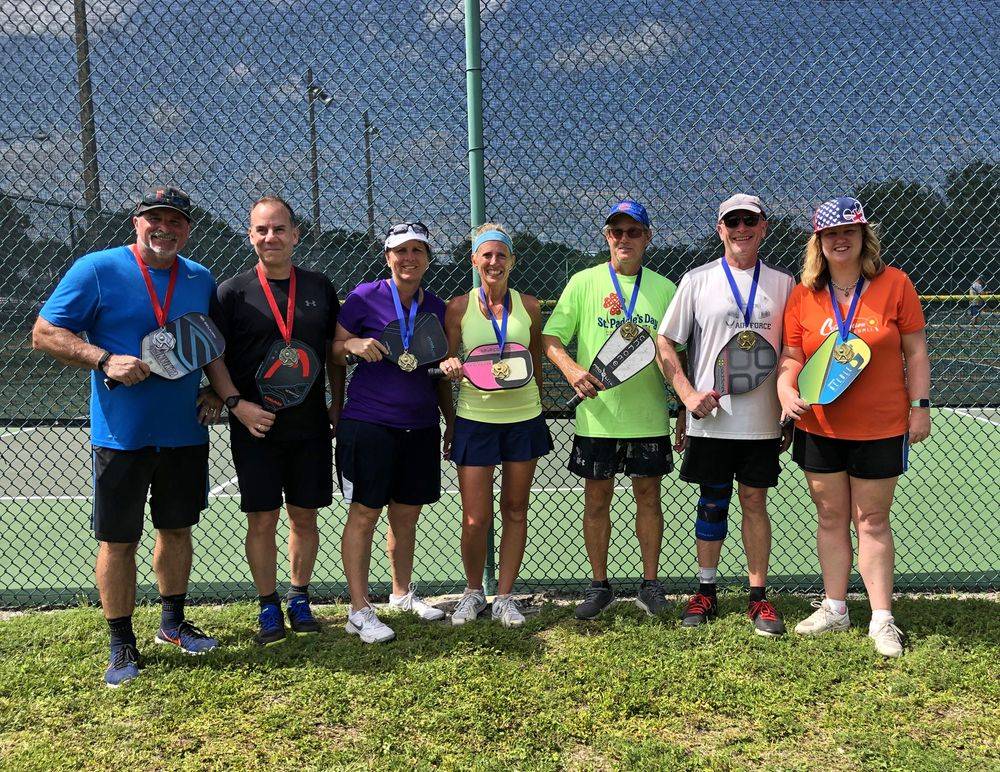 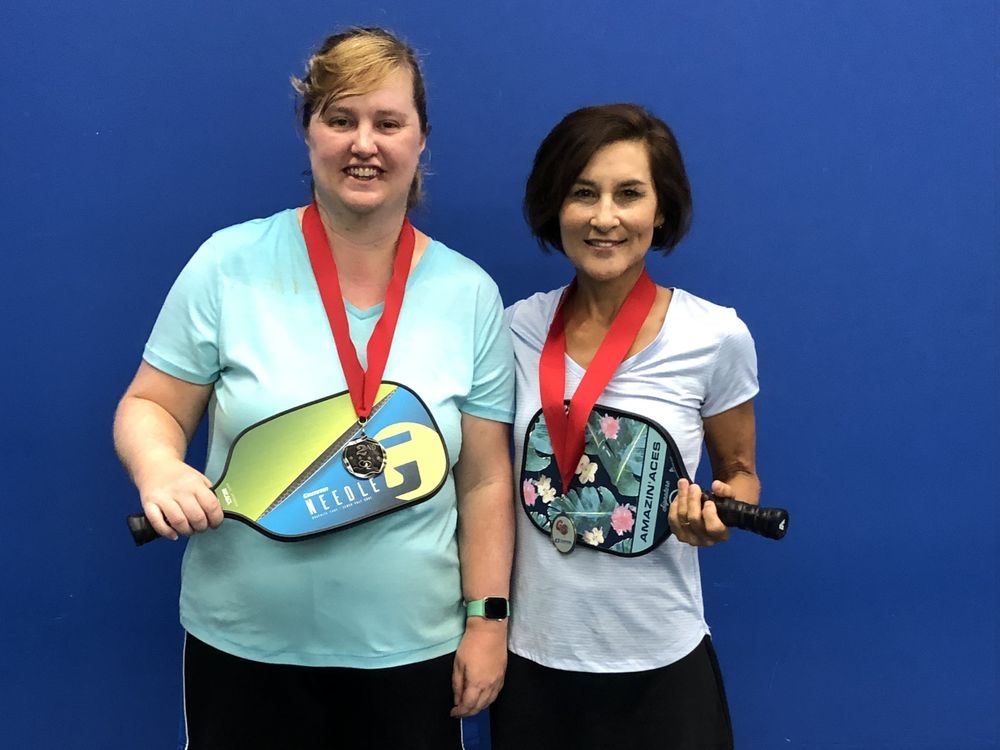 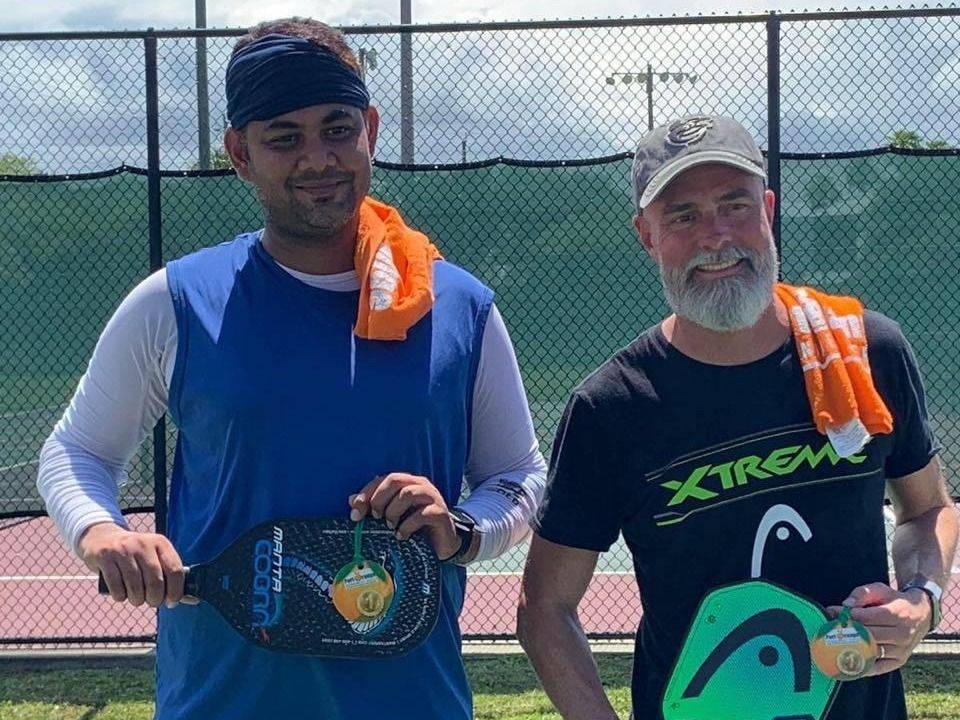 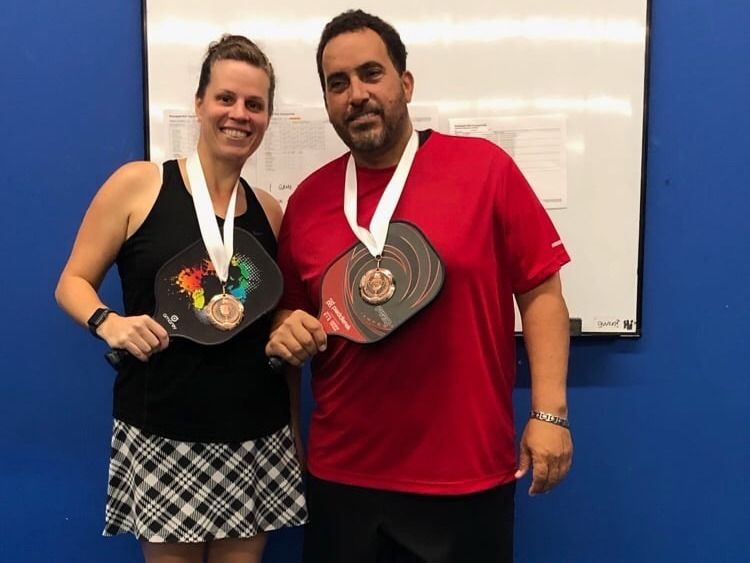 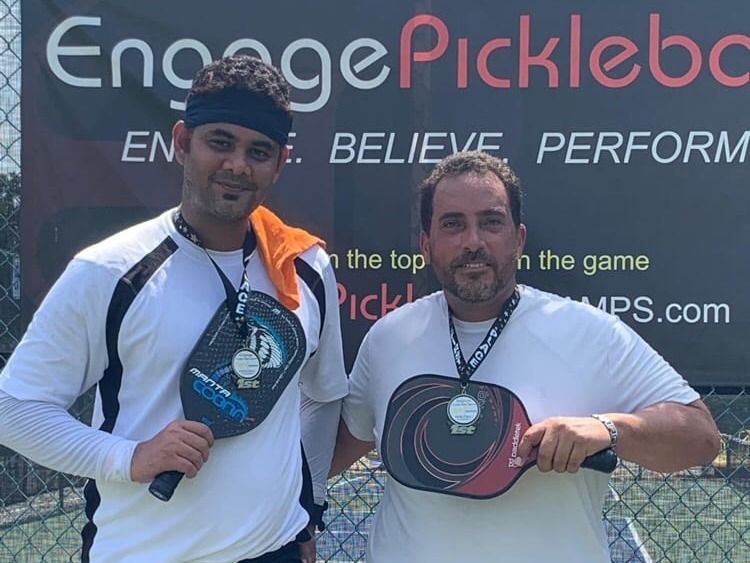 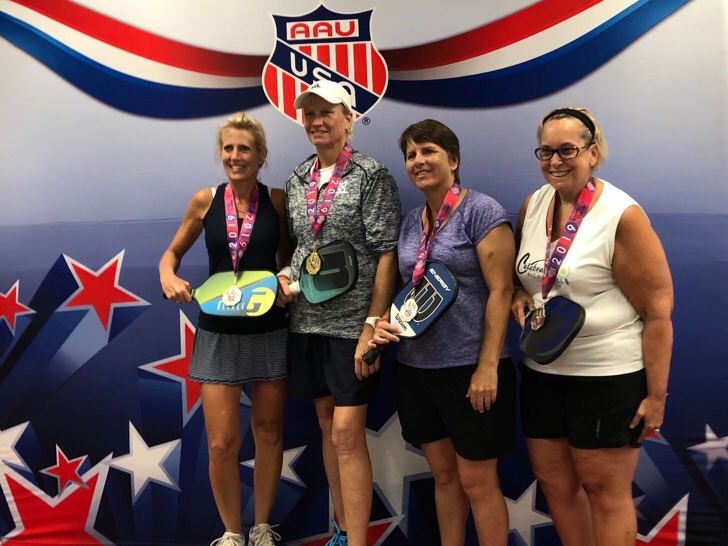 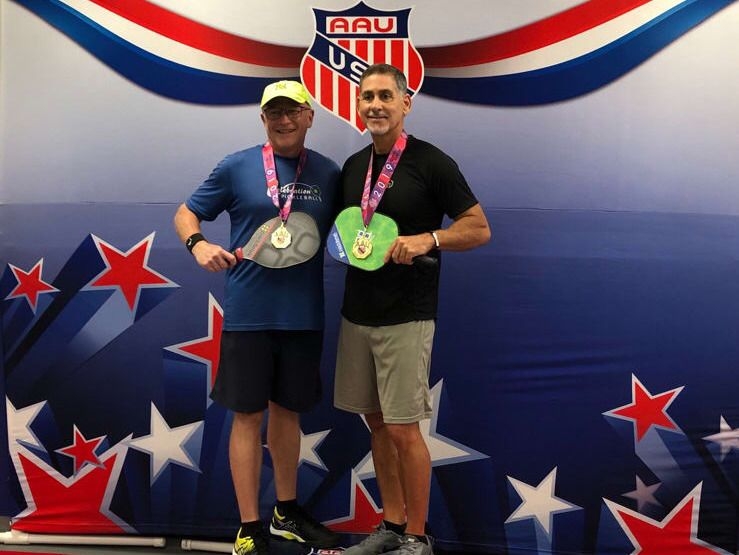 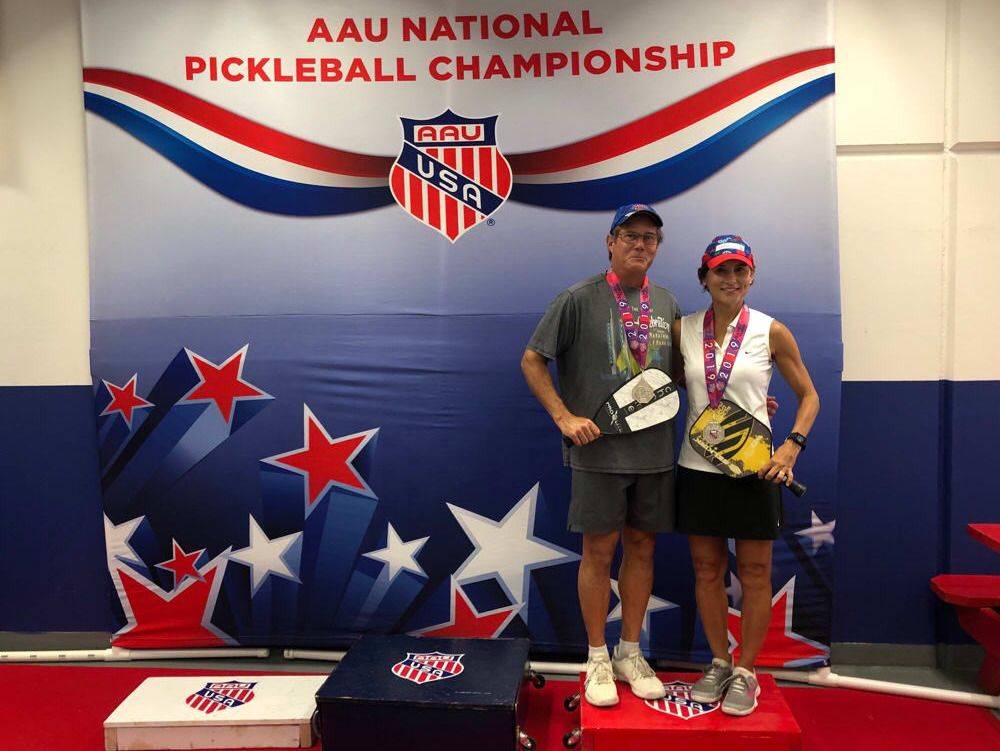 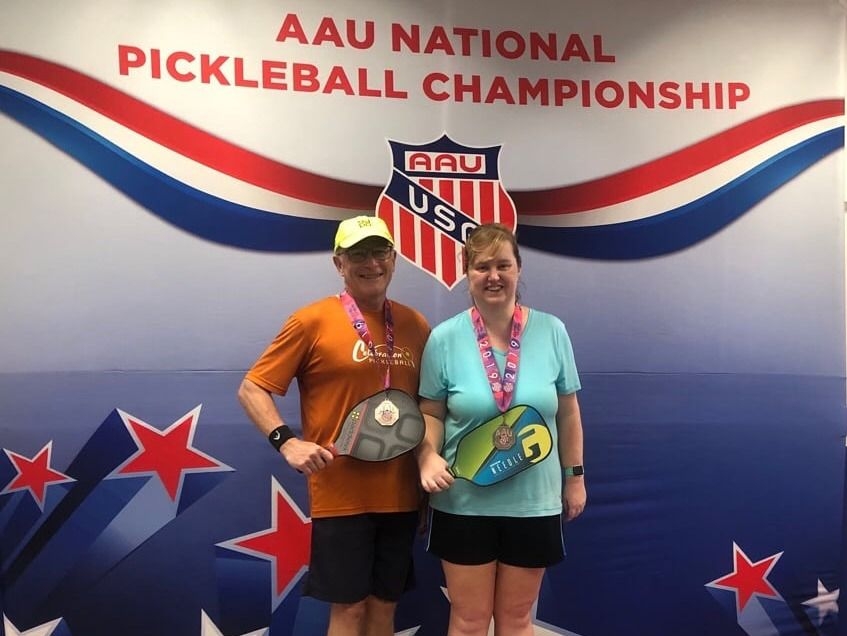 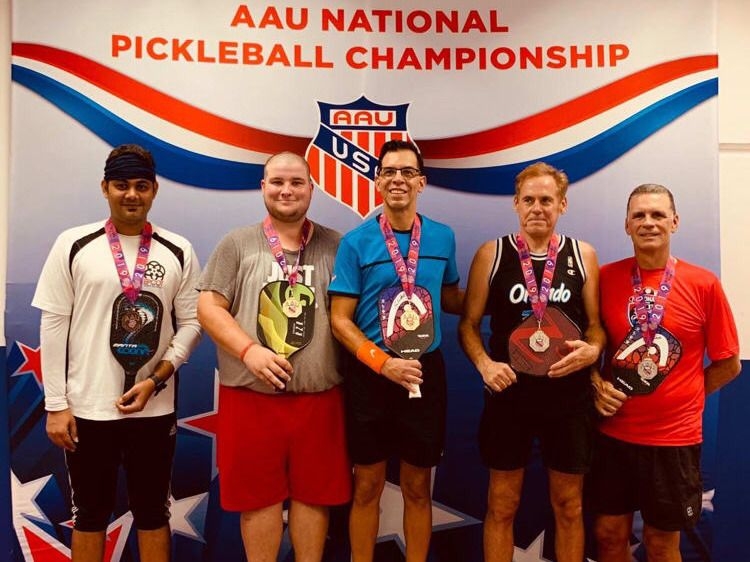 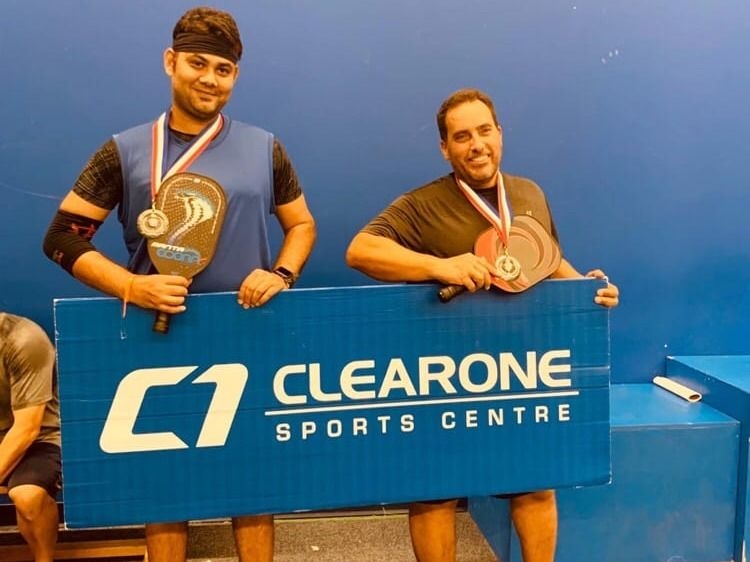 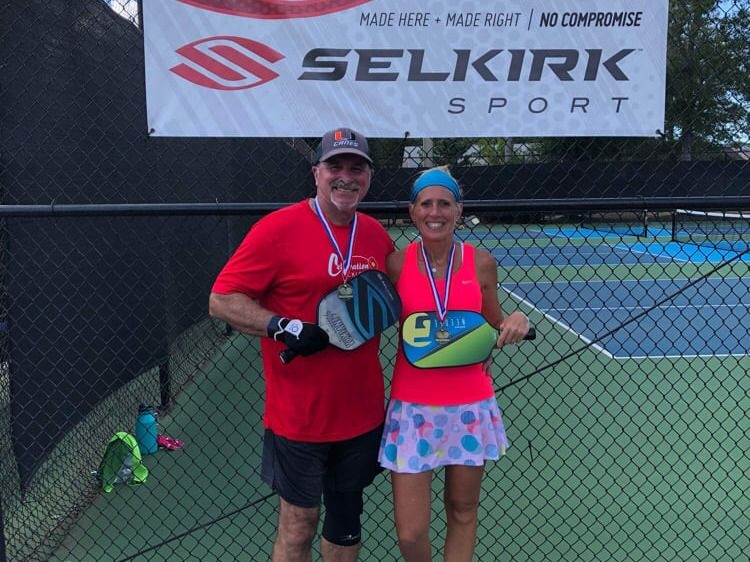 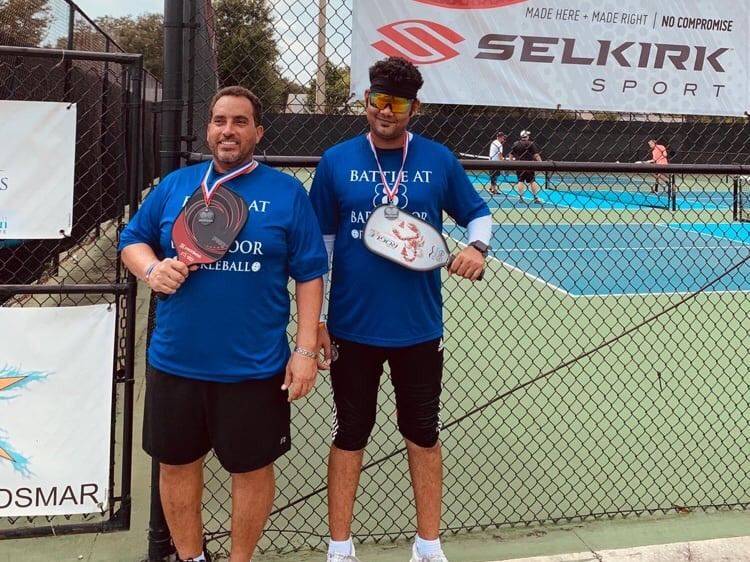 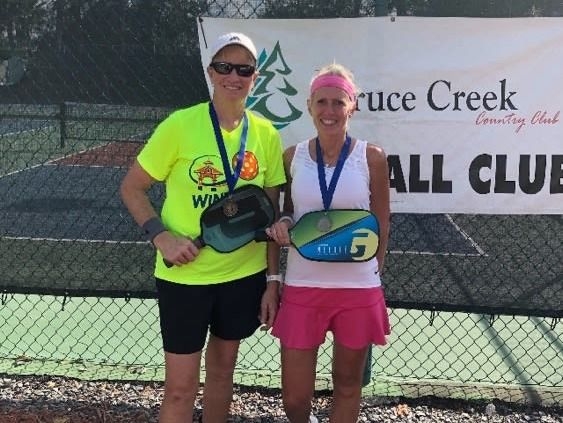 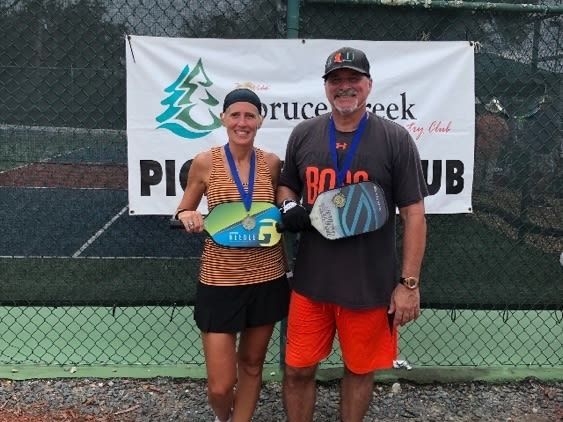 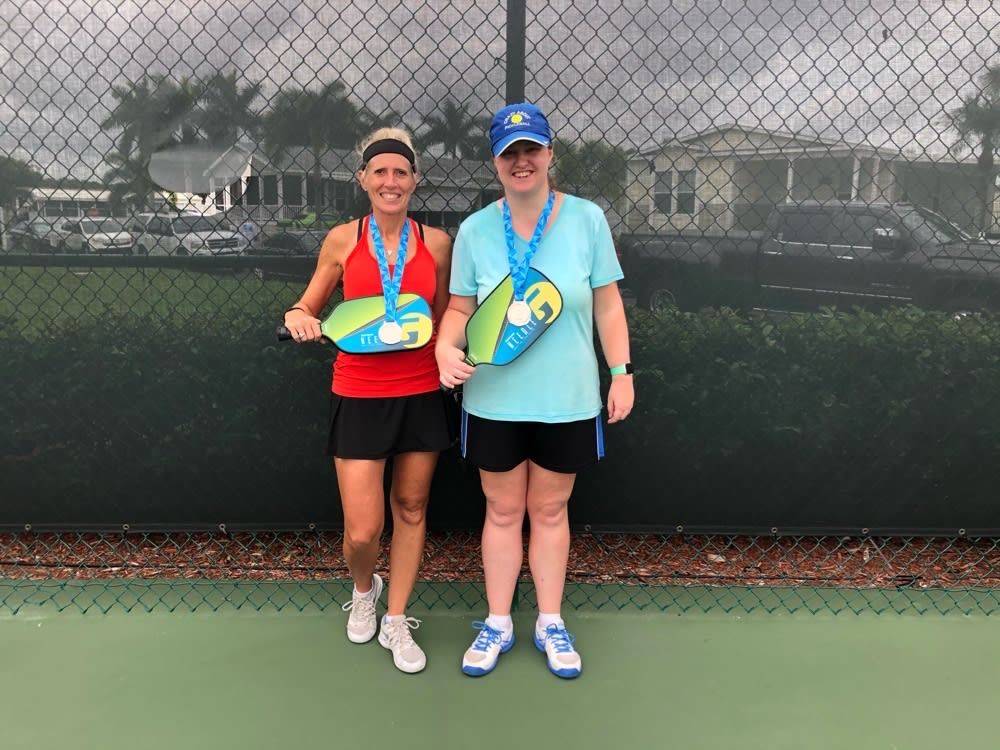 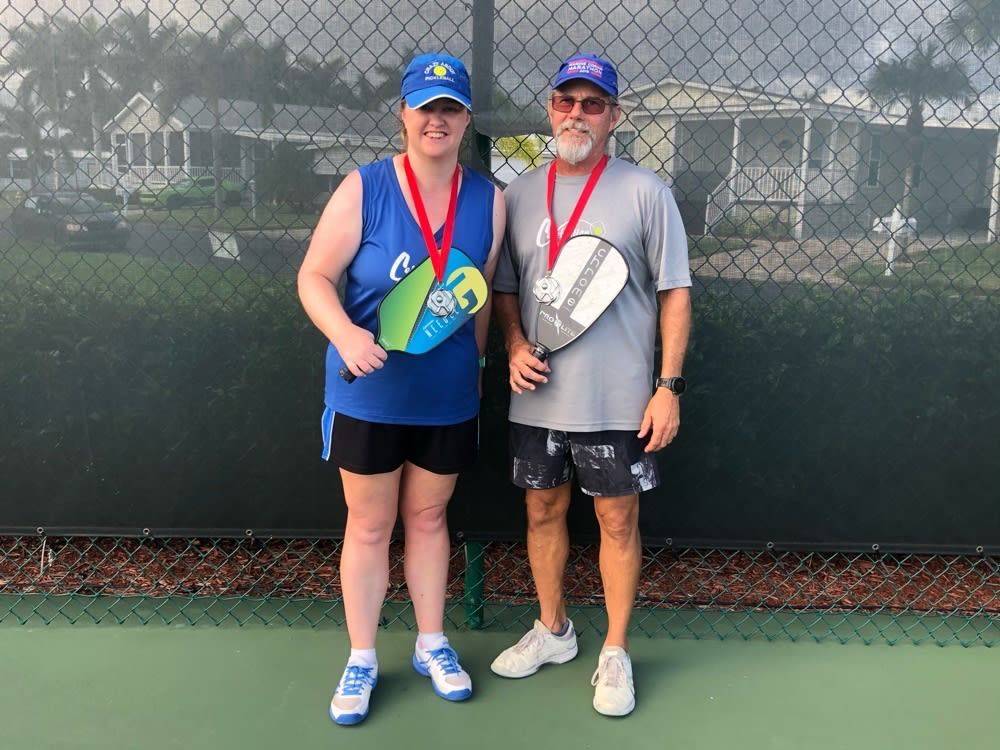 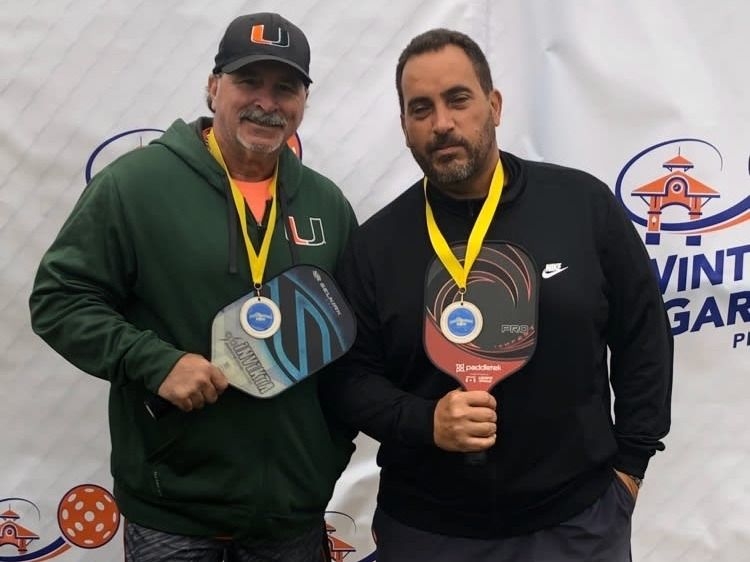 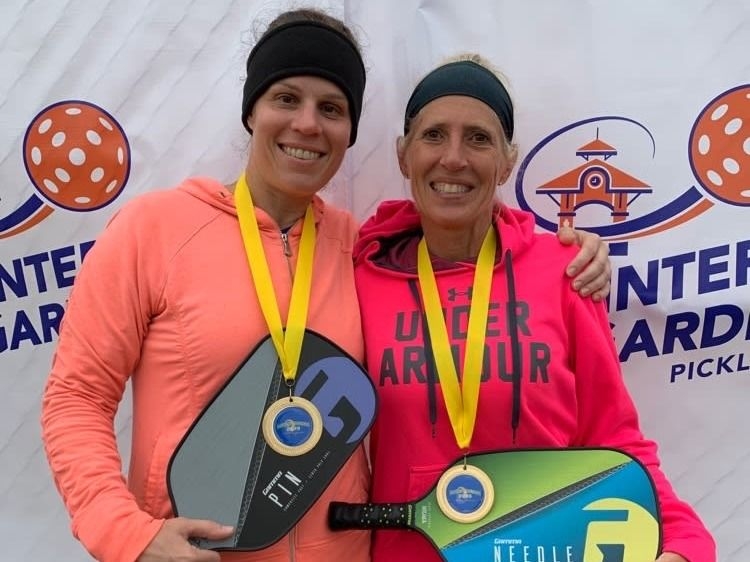 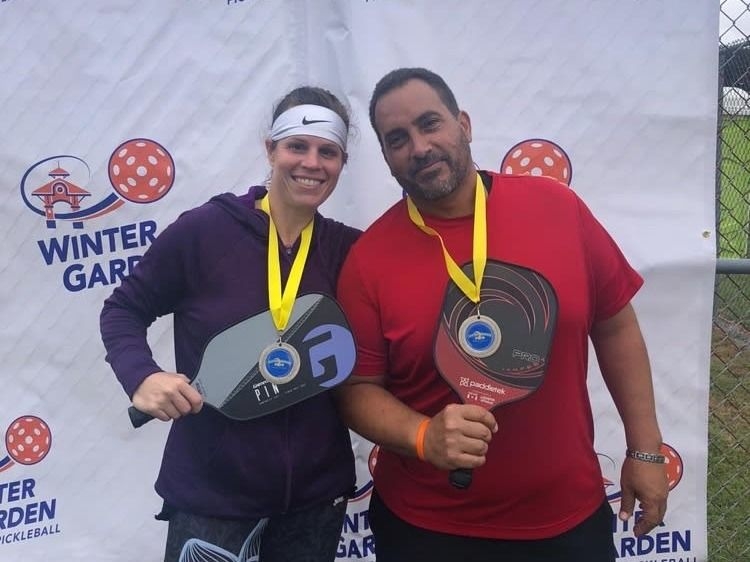 The end of February 2020, before Covid-19 was on anyone's radar there was one last major tournament! 8 of our club members went to St Augustine, brought home some bling (4 Golds, 2 Silvers, 1 Bronze) and had a great time!

Lucy Clark started an At Home Challenge for our club members. It involved 7 days of a challenge being released each day. Lucy recorded a video of herself doing a pickleball skill and our members had to match it. Every member who was able to complete all 7 challenges received a prize. This was well received so a bonus addition of 4 more challenges were released with an additional prize.

Our courts were closed for 2 months. When we returned, Lucy and Dave made sure we had safety guidelines and capacity limits in place. Restrictions gradually being adjusted as we progressed through 2020 and into 2021.

The dream is to have the town of ​Celebration, Florida, build permanent pickleball courts for their residents.